Maximo Veron is an independent producer, filmmaker, and director of the Ufology and Paranormal Phenomena International Film Festival. He is established in Argentina. In 2020 he created the festival where filmmakers and researchers have a debate space about the truth behind sci-fi in cinema. Due to unforeseen travel issues, this will be a virtual event. Due to unforeseen issues with travel, this will be a virtual event.

(Argentina) Animation:
Saturno
On a rainy night, a young man receives a strange and unexpected visit. Someone seems to be interested in him and his dear Saturno.
Director: Gaspar Aguirre
00:00:00 – 00:07:12
(France) Short Film:
Artefact
A man gets the power to rejuvenate and age things.
Director: Julien Paillet
00:07:13 – 00:12:40
(Germany) Animation:
Sugar – A Bittersweet Journey
“Sugar – A Bittersweet Journey” tells the story of an extraterrestrial exploring the universe for sugar in order to rescue his beloved planet.
Director: Ilya Landshut
00:12:41 – 00:20:16
(Spain) Short Film:
! No estamos solos (We are not alone)
MIKEL is a routine person who gets up every day to do the same type of work in his office and solve crossword puzzles during his breaks. However, he hopes that there is something beyond his repetitive reality: a sign that shows that “we are not alone”.
Director: Jorge Dolz
00:20:17 – 00:30:49
(Macedonia) Documentary Film:
(Extra)terrestrial Lee
“(Extra)terrestrial Lee” is a short documentary story about a tiny man who lives in a world who is wide several galaxies. Miki Lee Trajchevski is a resident of Shtip, Macedonia, where among the local population is known like the most educated homeless person in Shtip. Living his pastoral life in the nature around Shtip, occasionally he is in a position to be intergalactic agent between the aliens and the populace of Shtip. With his recognizable style: worn out jacket, dark glasses that he always wears, long untidy beard, white bucketand gunny bag, he wanders every day at the streets of Shtip. The film reveals the secrets of the aliens around Shtip with whom Miki communicates, shown trough his activities and rituals of connecting with the third kind, also interviews and telling from the local population, regarding this problem. Here we open the question whether Extra-Terrestrial Lee has made up these appearances of UFOs on the sky above Shtip or in that entire story there is possibility of truth?
The documentary film opens the subject on Trajchevski’s life, about the insignificance of material life and about the everyday activities and habits of our main character. Although Miki’s claims are a little bit surreal, unacceptable and insane, the stories of other citizens of the city beneath the fortress Isar and the articles and arguments of different mass-media will put you in doubt.
Director: Sashko Potter Micevski
00:30:50 – 00:52:45 *contains some mature content
(USA) Short Film:
Gothic Springs
A year after her grandfather’s alien abduction, a gothic teen girl visits her widowed grandmother only to discover what she thought was going to be a boring summer turns out to be out of this world.
Director: Lindsay Lemez
00:52:45 – 01:04:41 *contains some mature content
(South Africa) Experimental Short Film:
A Black Man in Zimbabwe
In 1994, 62 school children in Ruwa, Zimbabwe claimed to have seen a UFO and a black man on the school playground. No teachers or school employees witnessed the sighting. Fact or creative fabrication?
Filmed in extreme close-ups director Roger Horn lets his imagination run wild as he combines archival interviews with visuals collected throughout Southern Africa and Europe.
Director: Roger Horn
01:04:42 – 01:08:49
(France) Short Film:
Les Champs Magnétiques
Alone in the middle of a forest, Solal, eleven years old, equipped with a magnetic field detector, searches for his missing mother, convinced that she was abducted by aliens. His meeting with Lena, a runaway teenager intrigued by her behaviour, will upset his quest…
Director: Romain  Daudet-jahan
01:08:50 – 1:29:22 *contains some mature content
(Mexico) Short Film:
De la Luz (From the Light)
Mexican Immigrant family risks the Southwest desert in search of a better life, while encountering blinding lights in the sky.
Director: Alfonso Loya
1:29:23 – 01:50:26 *contains some mature content
(USA) Short Film:
Colossus
A young Navy pilot’s life is shattered after being shot down by a UFO in World War II. Consumed by obsessive fear and hatred, he sets out on a quest to find and kill the creature that put him burning into the sea.
Director: James Roe
01:50:27 – 02:07:34 *contains some mature content
(USA) Animation:
Flying Saucer
A flying saucer wreaks havoc on Earth.
Director: Spencer Liles
02:07:35 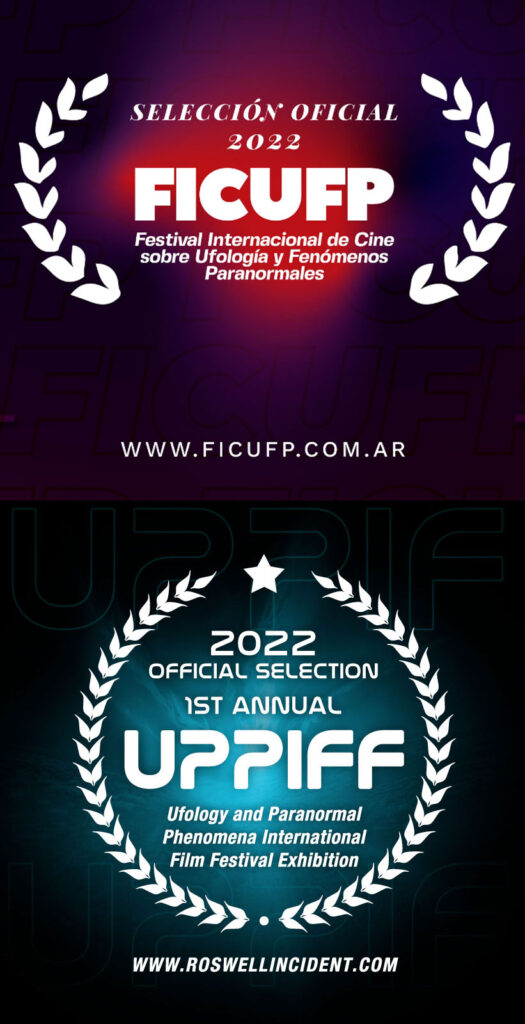